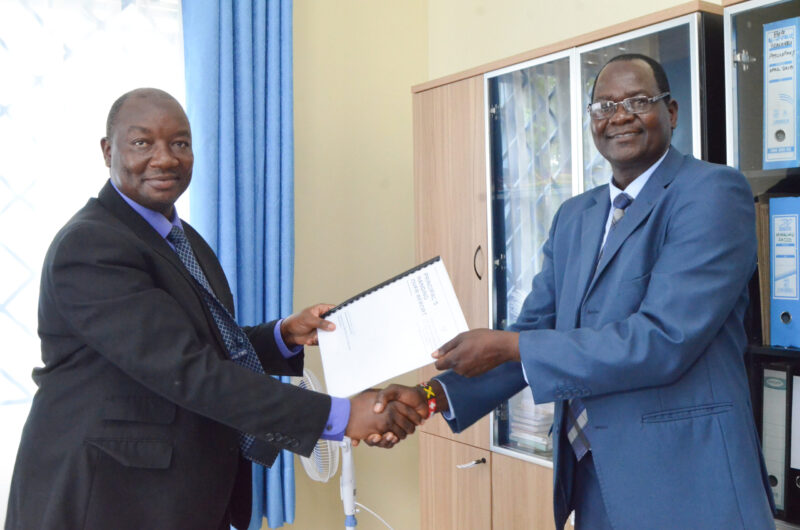 Siaya Institute of Technology (SIT) witnessed a change of guard after the recent reshuffle of Principals of various TVET institutions by the Ministry of Education in the State Department for Vocational and Technical Training.

The reshuffle by the Ministry saw over fifty Principals move to different stations across the TVET sector within the country. Among them, was Siaya Institute of Technology whose Principal Mr. J.W Odhiambo Okumu was transferred to the Kabete National Polytechnic as Mr. Daniel Randa Otieno took over the management of the SIT.

“It has been a pleasure serving at the institution for 18 months now and together with the Siaya Community we have achieved great milestones” Mr Okumu said during his final address to the staff of the institution. Mr. Okumu had served as the institution Principal for 18 months since March 2019 after a short stint at Sigalagala National Polytechnic where he served as the Deputy Principal in-charge of Administration, a position he previously held at the Kisumu National Polytechnic.

Mr Daniel Randa who takes over SIT leadership, was the Principal at Sikri Technical Training Institution before taking over leadership of the SIT. Mr. Randa is a seasoned and multi-skilled trainer with unique soft skills such as sign language communication and a deep understanding of people management “Mr Randa has been the Principal at Sikri Technical Training Institute, which is a special needs institution that tells you that his management skills are exceptional” Mr Okumu told staff who had gathered to welcome the new Principal.

The handing over process being very detailed and structured was conducted by senior Ministry of Education and County TVET officials hosted by the SIT Board of Governors. The Board chair, Mr. Kawa accompanied by other Board members were present to take part and witness the change over of leadership. The team toured the institution to help the new Principal familiarize with the environment and take stock of the inventory, later on the event culminated with the symbolic and official handing over of the office of the Principal by Mr Okumu to Mr Randa, crowned by signing of documents to seal the process.

Randa met and addressed his staff and promised to continue building the institution to fulfil its mission and vision in line with its mandate. “We wish Mr Okumu well as he proceeds to Kabete National Polytechnic, let him make Kabete better than he finds it. I will also do the same here” Mr. Randa remarked in his maiden speech.